You’re Enough! Show Up as You ARE.

Much of A Course in Miracles’ teaching is about following inspiration. So the other day I woke up with the inspiration to phone a friend. I wanted to see if she was up for joining. I spontaneously emailed her. To my surprise she was at her computer. She immediately responded to my email and wrote that she was available and would love to get together later that day.

As the thought of getting together swam through my mind, I had another thought of bringing food over to her place…so I emailed her again. And she was fine with that. But then something curious began to happen, my mind started to go into imaginary thinking, hypothetical scenarios and questioning. “Should I cook at my home, and then bring the food over? Or should I cook at her place? What if she didn’t want me to cook in her kitchen?” One after the other, thoughts, questions, concerns and insecurity had began to complicate the innocent inspiration of joining with her. I was running scenarios in mind, of her getting annoyed with my indecisiveness. My visit, now felt like it was “imposing.” My mind was caught in doubt, organizing thoughts, and trying to formulate the perfect meeting. My inspired proposition was now feeling like a burden!!!…I needed a miracle.

“The distractions of the ego may seem to interfere with your learning, but the ego has no power to distract you unless you give it the power to do so.” – A Course in Miracles

With a moment of pause, and willingness to be shown a different experience, it became clear that I was “adding” or accepting thoughts where none was needed. In other words, the inspiration to reach out to her and suggest the “get together” came from what was Real; Love and Guidance. The idea was given. Saying “yes” to that given thought, to join with her, felt right and was responded to in a loving way.

However, the “thinking” mind (which believes it’s in charge) began to add unnecessary commentary, story and hurdles…and then, mind exhaustion ensued (suffering). The ego thought system can take anything, including an innocent get together and try to weave it into thoughts of authorship and separation. With “me” at the center of its story, it all became personal.

“Clarity undoes confusion by definition, and to look upon darkness through light must dispel it.” – A Course in Miracles

I was to look within to dispel my confusion. So I asked myself “Where’s the uncertainty coming from?” With an open mind to Spirit and an intent to be as honest with myself as possible, it became clear that the thought stream of separation was rooted in an old pattern of believing “I’m not enough.” I felt like I’ve got to SHOW my worthiness by making the visit a big “to-do.”

When worthiness is in doubt we tend to overcompensate by people pleasing and trying to earn our “seat at the table.” None of this is necessary because our worth has already been establish by God. 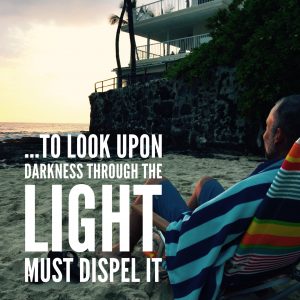 And with that awareness alone, I could see the impersonal detour the mind took into fear. It was a misperception. Rather than feeling the need to SHOW my worthiness I could express it by simply doing what felt good to me. It was about the JOYning with her, and togetherness, not the effort to make more out of it or sacrifice. Complexity is always of the ego.

I simultaneously laughed at myself for believing I was anything less than God’s extension; perfect . I realized that anything I chose to bring or do, that came from an expression of Love, would be perfect for this get together. The miracle had revealed itself. Ahhh…relief set in and I decided not do or bring anything to the gathering….I was enough, and guess what…we had a BLAST!