Spiritual Awakening Through Relationships and ACIM

A Course in Miracles says “In Reality you are perfectly unaffected by all expressions of lack of love.” Which means that in any situation where we feel we’re at the effect of the world (attacked), we are no longer IN Reality but instead in an illusion. When we’re effected by traffic, the news, what another person says or doesn’t say, the weather, politics…when we’re at the effect of ANYTHING in perception, we are not in Reality.

Having been conditioned by the world, however, we accept perception as real evidence and see a world for which is causative. It’s very “normal” to say “he makes me angry” or “because of you I feel (fill in the blank.)” But it is that very conditioning that is the cornerstone of suffering. The belief that “I can be a victim of the world I see,” will always produce fear. 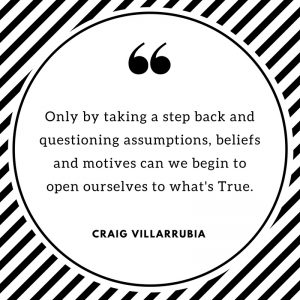 Only by taking a step back and questioning assumptions, beliefs and motives can we begin open ourselves to what’s True. No one can evaluate insanity from within it, we must pause…create a space for a greater wisdom to shine through. It is through the repetition of stepping back, also known as WILLINGNESS to see differently, that a new experience can emerge. It is a practice of owning our projections before we react to them.

Nowhere is this more helpful to practice than in our relationships. After all, isn’t it the work, family or romantic relationships that most riles us? And if so, isn’t it then the perfect training ground to address the mental blocks to the awareness of Reality?

Relationships are a great tool because they bring to our awareness the unconscious mental barriers that keep us out of Reality. Whenever we’re charged in a relationship, we’re being shown where healing is required. For example, for much of my life I believed I was at the effect of my mother’s influence and behavior. I would get angry ever time she mothered me or guilted me for not calling. But with the willingness to step back and use these charged moments to inquire, I am shown that my response (charge or upset) never has anything to do with my mother and what she did, but rather a reflection of what I was unconsciously holding in my mind.

“To forgive is merely to remember only the loving thoughts you gave in the past, and those that were given you.” – A Course in Miracles

When she mothered me, it was MY resistance to allowing her to give and extend to me in that moment. My defense towards it was an attempt to assert an identity that doesn’t need mothering. If she tried to guilt me for not calling, it was my own judgements about myself as a son, my doubts and guilt that she was reflecting back to me. Through honest inquiry and candid communication with my mom was it that these distractions to peace dissolve and make way for forgiveness. Our relationship has never been so open and loving.

As we begin to use relationships as a means to identify where we are still blocking or resisting life, we are shown the shadows that are cast by the misperceptions of who we think we are in relation to others. With awareness of these misperceptions we can offer them up to the Holy Spirit in exchange for the miracle (shift from fear to Love.)

Starting very soon I will be hosting a FREE 4-part ACIM webinar series titled IGNITING MIRACLES in RELATIONSHIPS. JOYn me, Kirsten Buxton and Cindy Lora-Renard as we delve into the topic of relationships. To learn more and register for the event visit: www.MiracleShareInternational.org/relationships

Here’s a clip from a recent talk in Hawaii about relationships: