Life After Making the ACIM Documentary and Leaving a Career 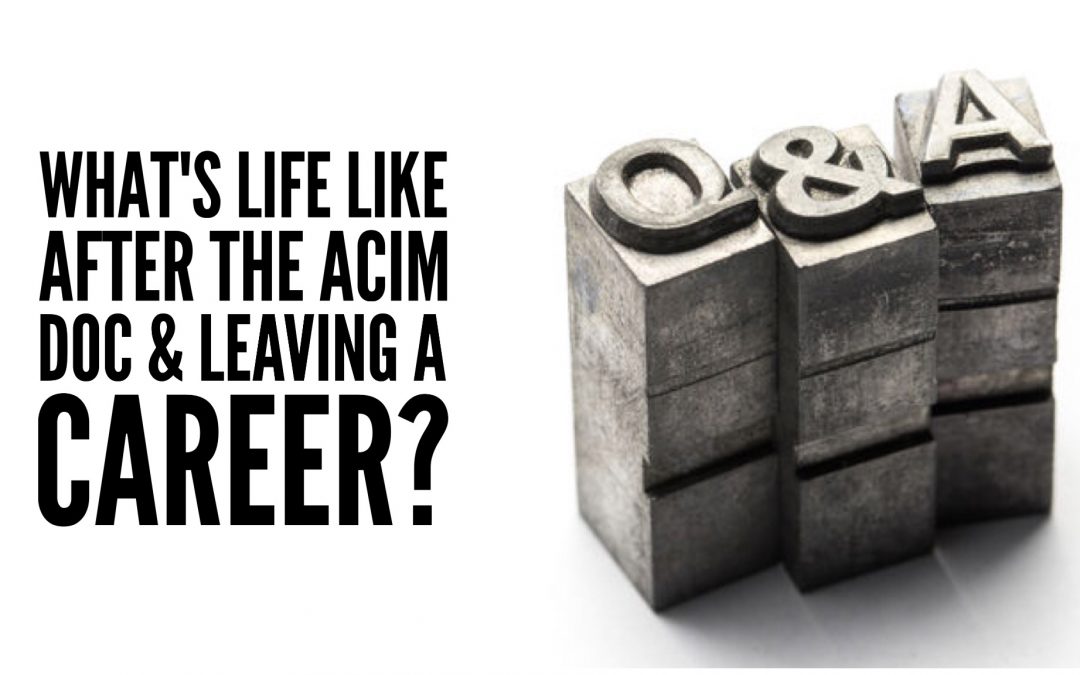 QUESTION: It’s been a year since you have left your career. Can you reflect on this? I have done the same and now I am wondering what is next and can I pay the bills? Actually I would like to know how can you practice ACIM and hold a regular job?

ANSWER: The root word of “career” is the Latin “carrus.” One Middle French derivative of “carrus” is “carriere,” meaning “racecourse,” and when the noun “career” first appeared in English it meant “racetrack.” To have a career, is to be on a set course,  timeline or trajectory. And in my experience, having a career always felt like a race. How fast can I get to the non-existent finish line?

The experience of managing a career, in many ways felt like a treadmill. I was constantly anticipating the next promotion, assignment or merit raise. I was on a chase for status and more of something. I always felt the need to justify my place within the organization and desperately wanted to be seen in good light.

From the perspective of success, as defined by the world, I was good at it and it seemed quite normal. It afforded me, what I believed at the time, the means to happiness. However, there was always a faint sense (sometimes not always faint), of discontentment. The practice of ACIM sparked a call to Truth and an invitation to a big adventure. My resignation represented a decision to get out of the game and follow Spirit.

I left my job in December 2014. The leave and residential move that followed, is symbolic in many ways. As portrayed in the documentary film, A Course in Miracles – Enlightenment or Bust!, leaving my career was difficult, in the sense that I was laying aside a trajectory for which I thought my life would take.

Leaving my career, to follow inspiration, which was to move to Hawaii and devote myself to mind training, was a step that I knew I had to face in order to overcome my fears of being without a career. I needed to step away from it to realize the joy that comes with following inspiration. In taking the many steps that came my way, I faced fears and realized that freedom lies in spontaneity and not being tied to a timeline. I’ve since spent much of the last two years in community, traveling with my film, mind training and being silent.

I’ve learned that I never really want to attach to any plan. My intent is to keep the space open. I never know what’s next and best in any situation. Trust is the key to my worries about paying the bills. I was programmed to believe that money, abundance, and security comes from a steady paycheck. And that’s simply not true. Yes, a job does come with a paycheck, but that’s just ONE way money can manifest its way into my experience.

It’s important to not limit how abundance manifests in my experience. I’ve had money come to me from people who donated and paid me for small projects. On the ranch, where I live, I found exotic wood that grows on my land and found people who actually pay a lot of money for it. I’ve since began a reforestation project. It’s a amazing how symbols of abundance appear when we accept abundance as who and what we are…it can’t help but be reflected.

ACIM Lesson 50 says “I am sustained by the love of God.” This is not to say that God is giving me a paycheck, but it is to say that what I need will be there for me when I need it. And if it’s not, it’s not needed.

“Some of your greatest advances you have judged as failures, and some of your deepest retreats you have evaluated as success.” – A Course in Miracles

It’s also important to mention that when I say I “Trust,” I’m not trusting necessarily that the bills are going to be paid, but rather that I will be okay regardless of whether or not the bills get paid. This doesn’t mean I sit back and do nothing, but it does mean that I’m forgiving thoughts of worry about paying bills. I’m entrusting the future to a power that knows my best interest…and I do that by simply following inspiration and guidance NOW.

The challenge that most of us have about not having a money flow, are the thoughts that want to predict and know, in advance, how abundance should show up in our experience. We carry a fear of not being taken care of…OR we decide, thinking we know our best interest, how we should be sustained. 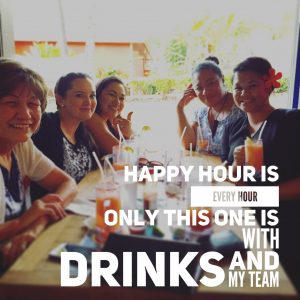 Co-Workers and I Having Fun After Work

Surprisingly, I’ve recently taken a job. Something I would not have predicted. However, I don’t see or relate to the job in the same way as before. My current role is giving me an opportunity to recognize and reintegrate what I’ve learned over the last 2 years into a work experience. My main goal is no longer career. If I lost my job tomorrow, I’d be fine with it. I’m not sure how long this job will last. What I do know however, is that my goal is peace and my function is happiness. What happens in perception is secondary. And if ever peace is disturbed, I know there’s something to heal. From this perspective, ACIM and its principles fit right in (as they do in any worldly experience). ACIM is about forgiveness and there’s no place where forgiveness isn’t welcome.

The cool thing about the job that I recently took, is that after being in a relatively isolated experience at the ranch, I’m now collaborating and having fun with new relationships, a team I enjoy spending time with…it’s an experience of abundance that can’t be measured by dollar bills. I’ve even decided to take up a part-time residence in a small apartment in a different town. There’s a whole new world of experience that I’m having that I would not have had otherwise or expected.

A Course in Miracles speaks a lot about leaving the world. But I’ve realized that the Course is speaking in terms of our thoughts about the world, our attachments an 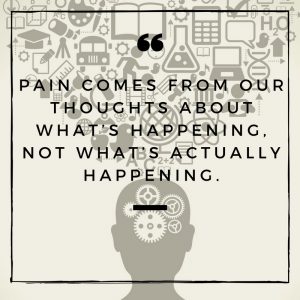 d investments. It has nothing to do with behavior, location, working or not working. There’s nothing inherently wrong with a job. Pain associated with work comes from our thoughts about what’s happening, never what’s actually happening. When we create a special relationship with work, seek an identity and live on a timeline, problems arise. Can we instead be agile, float like a feather? …Allow roles to come and go as they’re called for, without the need to “make” it something or hold on to it? Can we instead be in the experience of whatever we’re doing without having judgments or thoughts about the past or future?

Spiritual Awakening is about following the heart and listening to guidance (without judgment for or against anything). In this process we chip away, little by little, the ideas and beliefs that make up the mistaken self-concept of me. When we step back, witness and receive life as its flows, we become witness to Grace at work (no pun intended)….two years have gone by since leaving my career and I’m still happy watching the journey unfold.